Courtesy of Bernie Puchalski at the St. Catharines Standard:

When Kayla McGowan first joined the Niagara Olympic Club more than a year ago, she was always getting beaten by the more experienced distance runners at the club.
“They had all been doing it for a long time and I was very intimidated by them,” said the Grade 10 student at Eden in St. Catharines. “I always let them win and I would trail behind.”
All that began to change last spring when she was seventh in both the 1,500 and 3,000 metres in the midget girls division at the Ontario Federation of School Athletic Associations track and field championships. A second in the 3,000 metres and fourth in the 1,500 metres at this past summer’s Athletics Ontario championships has brought out the competitiveness in the 15-year-old.
“At practices I don’t let people pass me,” she said. “I have to win now. The feeling of winning is so good that I don’t want to give it up.” 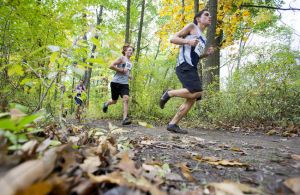 Extracted from the excellent coverage by Bernie Puchalski in The St. Catharines Standard:

“I ran very slow at track,” the Grade 12 student at Holy Cross said.

She discovered she was battling the same iron deficiency issues she had in Grade 9, and was able to resolve the problem.

“I’ve been really building, and I have been having a good season so far,” said the 17-year-old, who won the Zone 4 senior girls individual cross-country title Wednesday at Burgoyne Woods.

The multiple Zone 4 champion, who has made it to OFSAA on three previous occasions, ran a comfortable race Wednesday.

“It felt good,” she said. “I was running in a big pack with all my friends and it was nice to get out and run with them again. It has been a while.”

It was a relaxing run, with so many runners moving on to SOSSA next week.

“There’s not a lot of pressure, so it is mostly going out at my own pace.”

“Laura is really strong right now. She has had really great preparation for cross-country and she’s running with more confidence,” Stewart said.

Korsmit has been getting pushed in practice by Ridgeway-Crystal Beach’s Kristen Kuhn, who has joined the NOC.

“It is really nice to have someone my age to train with,” Korsmit said.

This is her final year of high school running and she is open to both American and Canadian scholarship offers.

“I want to go into accounting and I don’t know if I can do that in the States,” she said. “And I like a lot of the schools here, too.”

McMaster and Queen’s are on her radar, although Brock isn’t.

“I don’t know if I want to be that close to home,” she said with a laugh.

Before she thinks of university, there’s a high school season to complete.

“I don’t think there is any pressure, because I don’t think it will affect what will happen in my future,” she said. “I can make it happen without it, but I really want to do well this year.”

She has no specific goal for OFSAA.

“I want to run a really good time and push myself,” she said.

Here are the results for the SOSSA Cross Country meet.

Team Qualifiers to OFSAA:
If any changes are needed include an alternate OFSAA will make the change for you on Friday or Saturday before the races begin. I suggest that you bring a copy of the Zone results so that you can demonstrate that your runner has participated in the series. This will save them from having to look for the results in the package that they receive from me.

Remember that school singlets must be identical in each age group.

OFSAA information here:
http://www.ofsaa.on.ca/cross-country-running
Park will be open for parking on Friday, November 2nd for registration and orientation.

The Conservation Area and Heart Lake Road will be closed to all traffic on Saturday, November 3rd with the exception of school buses dropping off teams.

The drop off will be at the entrance of the conservation area. School buses must then travel to one of the two shuttle sites.

All other athletes, coaches and spectators will use a shuttle bus service from Harold Braithwaite SS (415 Great Lakes Drive, Brampton) or Mayfield SS (5000 Mayfield Road, Brampton). Please adjust your travel time accordingly. (30 minutes) The shuttle will cost $2 for spectators. Athletes must show their competitor number and coaches their coaches pass to board the buses for free.